Our U18 Terriers captured the title at the Stratford Regional Silver Stick on November 6th. Just a couple of short weeks after learning that their friend and teammate, Matthew MacIntosh, had been diagnosed with a rare form of Leukemia, this determined group of young players went out and proved to the hockey world that resolve and determination can overcome any opponent. They finished round robin play with a 2-0-1 record, which was enough to get them into the semi-final round. They made the most of their opportunity and beat the Toronto Shamrocks 2-1 to advance to Sunday’s final, where they would face their archrival, the Oakville Rangers Red. “We scored early in the first period, and we hung in there and held them off for the big win!” commented coach Mark Hrinco. This was the 4th meeting of the year between these two teams and all of the games have either ended in a tie or been one goal nail-biters. Congratulations to each and every member of this team and the entire coaching and support staff. We are very proud of your accomplishment. 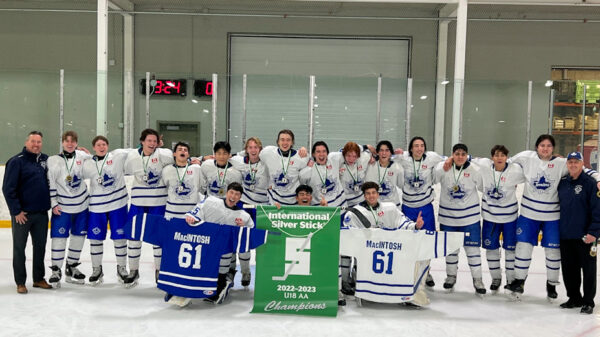